When the world already stands devastated with brutalities and horrors that human beings are wrecking upon other human beings, comes across the despicable crime towards a lovely, 8 year old child. Name, caste, community, religion, village, family, country or politics – nothing, absolutely nothing, should matter in the path of justice.

The National Crime Records Bureau (NCRB) states of 8, 541 rapes against minors in India in 2012. We know in 6 years, the numbers would have risen.

We just know it.

Why don’t we do something about it???

Why do we pretend we don’t know these gruesome realities???

Why do we turn away and plead ignorance???

The Mahatma – Apostle of Peace

Disturbed, anguished and pained, I reached Sabarmati Ashram. Home to Mahatma and Kasturba Gandhi from 1917 – 1930. 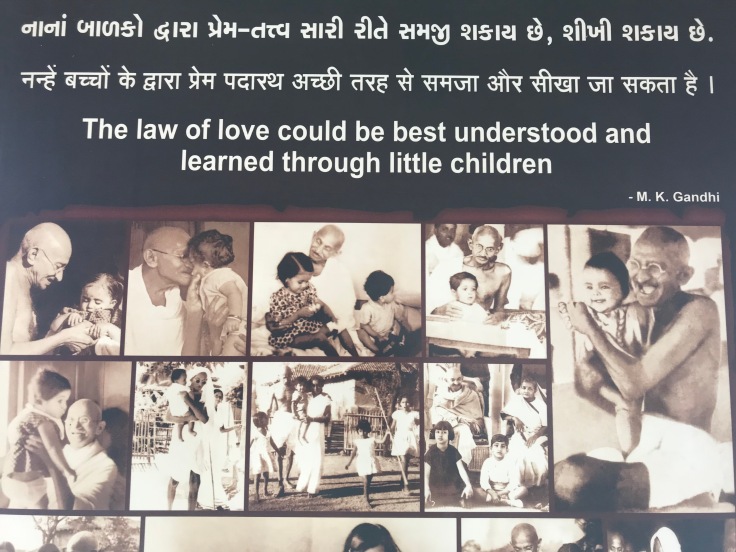 Bapu loved children and they too loved him. This love was innocent and pure.

How much pained would he have been to see the India of his dreams shatter itself??? When all laws are broken, those of civil society and humanity.

Sitting in Kasturba’s room, wondering what she would have felt today if she looked out of her window into the horrors of the world outside…  Would she have told the mothers of the raped minors what she had once told a woman who was complaining about having a daughter???

“You are lucky you have at least a daughter of your own. It must be nice to be loved by a daughter. I have no daughter of my own. We took one by adoption. She is Laxmi whom we got from a Harijan family. But even she is denied to me. Bapu is away, my sons are away, Laxmi is away – all working for Hindustan. The only consolation is that it is all for the sake of the country.”

Would her heart not have broken into millions of pieces knowing that these raped minors ceased to be daughters but just innocent prey to inhuman torturers???

What country did we build???

Before we turn into pawns at the hands of political parties who use control media – print or digital – we should remind ourselves what Kasturba had innocently remarked during the Bardoli Satyagraha,

“…I wish I had attended school. If only I knew newspapermen would sometimes harass me for ‘statements’. But I don’t like newspapermen. They are not truthful in their work………”

Today, the Charka is silent, Gandhiji’s seat is quiet… but the silence is deafeningly!

Where are we going???

6 thoughts on “Turning to Gandhi …”