My first review as the Mumbai correspondent for Art Fact, the newsletter for ArtsAcre Foundation, Kolkata

I could stare at that Persian couple the rest of my life – really! Her hairstyle, their fashionable garments and footwear, his headgear, her direct gaze and his almond dreamy eyes – together they were celebs of their day surely! Just their paparazzi was different – a group of specially appointed painters and not a bunch of hungry photographers jostling for the first shot.

The painting looks so real that I stop and wait for them to step out of their space and ask who their fashion stylists and designers were and could I find the same? Just that the couple belonged to 1835, and I am another star struck viewer to their style!

This couple beckons me from a series of around 120 paintings at the exhibition ‘Indian life and people in the 19th century’ Company paintings from the TAPI & CSMVS collections. Collectively labeled as ‘Company paintings’ they denote a group of watercolours that were commissioned by the British East India Company officials between the 18th and 19th centuries. The artists were earlier painters in the ateliers of the Mughals and other Indian royal states. They found themselves patron less when the power shifted to the British, and moved to the next most powerful political and financial centres in Calcutta, Delhi, Tanjore, Murshidabad, Kutch, Patna, Kerala, Kolkata and the Andhra coast.

I first came across this style of paintings by the prolific artist Sewak Ram and his contemporaries while working for the Bihar Museum project in Patna. He had migrated there in search of work from Murshidabad. A sizeable collection of Company Paintings, knows as the ‘Patna Qalam’ is still with the Patna Museum, some on display.

But how do we recognise these paintings and classify them as ‘Company School’? The most important clue lies in their subject matter as portray the social, cultural, political, professional life and lifestyles of the common people. Unlike the miniature paintings of the previous eras where the grand secular or religious lives of the rulers were shown – the commoner was usually never part of these elaborate compositions. From these paintings, one can easily construe the lives, religious beliefs, professions, lifestyles, recreations, garments, footwear, headgear, furnishings, transportation systems and fashions of 200 years back in time.

These paintings, for me, are very much like the social media of today’s times. They seem to record glimpses of anything fascinating, something unusual that catches the eye, moments out of the blue, stuff that one never dreamt of – basically everything that the British officials, the soldiers, their families and friends came across which was so different from their Home in Britain. It is true that these are like postcards sent from a far-flung tropical country, India, with its unusual colours, fragrances, flavours, customs, and peoples. Did the British eventually try to imitate the style of the Persian couple, I wonder?

Typical of the Company School, these paintings focus directly on their subject and not much on the background, though the simple and straight perspective of the buildings make them quite recognisable. The style follows more of an European colour palette of subdued shades and not the bright red, lapis lazuli or gold of the earlier miniature paintings. These paintings are mostly part of albums, like the Fraser, and when bound together represented themes like professions or religious lives and the paraphernalia of both. We come across artists Shaykh Muhammad Amir of Karraya, Munna Lal who I love to imagine engaged in animated discussions with their patrons as to how best to portray what the British saw with their ‘foreign’ eye.

What would Lacan and Foucault have to comment on the ‘gaze’ about these paintings in the power structural context? Would they be debating about the ‘imperial’, ‘colonial’ and the ‘male gaze’? The Mughal and other miniature schools were getting themselves painted for viewership by mostly their own, while these paintings are created by local artists for satisfying the gaze of an ‘outsider’ for an unknown world beyond their knowledge. Interesting isn’t it? Do not forget to relook at this group of paintings and try to unravel the layers of narrative hidden within them. 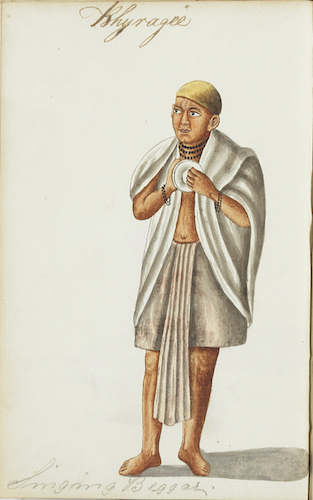 In case you have missed the exhibition and the fascinating talk by William Dalrymple before he inaugurated it, you should definitely get a copy of the extremely enriching catalogue written by Dr Jerry Losty for the TAPI collection, on which the exhibition is based. The interactive and interpretive curation by Dr Vandana Prapanna, Senior Curator, CSMVS, and her team, makes it compelling for the visitor to keep revisiting the paintings with the display of objects from the same era. So when are you looking at the painting, you are also seeing the terracotta figurines within the same frame – as 3d versions of the figures in the paintings! These terracotta figurines are historical cultural icons in their own right, made in Lucknow, Chandernagore and Madras around the same time.

TAPI, an acronym for Textiles and Art of the People of India, is based out of Surat by the collectors Shilpa and Praful Shah. For decades they have lovingly put together a large collection of Indian artefacts, mainly textiles, and are very enthusiastic about sharing it through exhibitions and publications.

9 thoughts on “The Look Book: when they saw us, and how!”