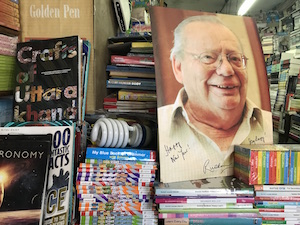 Landour is the land of Ruskin Bond.

one is English love and the other is Hindi+Urdu love 🙂

If this sounds bizarre at all then that’s how it is! Everything about Landour and Mussoorie is quite surreal…

Loved by the British in the late 19th and early 20th century, both Mussoorie and Landor are located on some of the most picturesque parts of the Himalayas. Steep slopes, stunning views, clear air, romantic vistas, lush green dense forests apt for hunting and hideouts – everything about these sites suited the British colonisers. Landour is actually credited to be initially built by the British for the army as a cantonment, with a sanatorium for recuperation of their soldiers. It’s name is borrowed ‘from Llanddowror, a village in Carmarthenshire in southwest Wales.’ Even today, you will find old sprawling homes with Scottish and Irish names. As if there’s a bit of Ireland and Scotland in India. 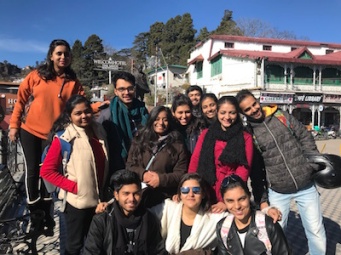 It was my first visit to this romantic (you’ll see this word a lot in this post) destination of Mussorie+Landour = Queen of the Hills so the 3rd year students of the School of Design, Doon University, took charge to be the local guides. Don’t assume it was just fun, we went there as part of a course I was taking with them. We were looking at the different layers and perspectives that are associated with historical sites and how we believe what we believe. How is information conveyed to us and how easily we can misconstrue it. 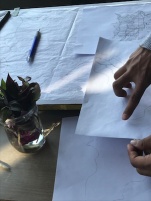 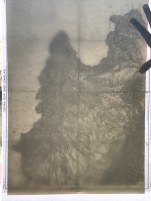 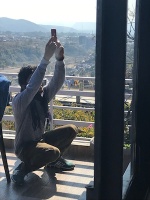 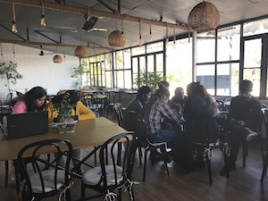 They studied old maps, researched about the history of the places, found new routes for us to walk about, pointed out important monuments and buildings, chatted up with locals and updated about gossip. And, as usual, we tasted some delectable local cuisine. Preparation started at the stunning Chhaya Cafe at Dehradun, before the actual day trip to M+L. There are always lots of selfies and groupies in tours with young people :p I just love this manner of documentation as when I see these photographs/videos I can recollect so much which one tends to otherwise forget. Don’t you think so?

We set off one early Monday morning as I was cautioned about the horrible tourists zipping down from Delhi and Chandigarh, driving big cars with blaring vulgar music, misbehaving with locals and causing km long traffic jams – so no weekend long drive to these places.

We left Dehradun after searching for the perfect shop that makes the yummiest hot paranthas. Btw for the uninitiated, there are hordes of Maggi making stalls all over these cities and towns, I was tempted but was directed towards more local food stalls that serve interesting inventions.

The first lovely and quaint building in front of you as you enter Mussoorie is her library. Overlooking the Mall Road, it was built in 1843 for her residents and was well stocked with books of that era. Walter Scott, Thomas Hardy, R L Stevenson were some of the favourite authors of the day so the residents were much inspired by their works. Apparently the two of the six famous schools here, Woodstock and Convent of Jesus and Mary Waverley were named after Scott’s writings! 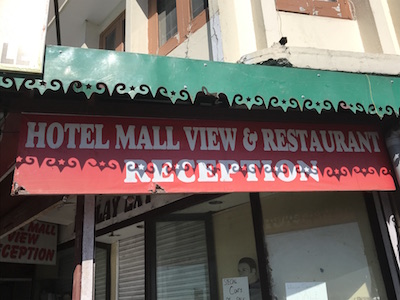 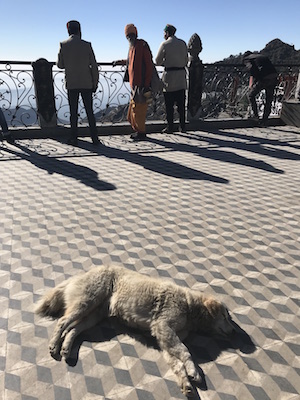 Today, what you witness of the small town that grew up around the hunting lodge set up by Lt Frederick Young of the East India Company in 1823 is utter chaos, traffic jams, ruckus loving tourists. Though the local government has tried to create some order in this craziness, Mussoorie fails to represent Hardy’s world of ‘far from the madding crowd’. The picture-postcard-perfect town of 150 years is all but gone… Agatha Christie is said to have written her first novel inspired by a murder in the Savoy Hotel here though she had to change the setting due to her editor’s demand. M+L was once definitely famous with the rich and famous!

In the quest for discovering new routes and some peace and sanity, some of us ventured off the beaten path and walked around steep slopes and long winding roads. If you have read Bond, you can actually feel those stories come alive and believe those characters brush past you. Yes, truly Susanna’s lived here and her 7 husbands could be buried just anywhere!!! We constantly kept writing and rewriting scripts as we walked around 😛

On the way to where the rest of the group was waiting for us, we came across two interesting stop overs. First was the viewpoint from which a romantic panoramic view of the Himalayas was visible. Growing up in the desert land of Rajasthan, this was magic for me! An old man regaled us with stories of the mountains he believed to be true – mythological characters walking around us brought the place to life. 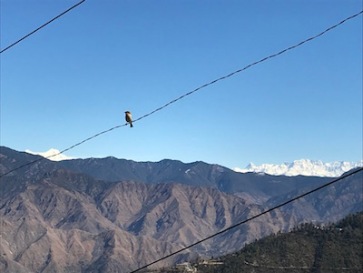 Just in case you would be interested, Wikipedia says: In 1850 the first beer brewery in India was built in Mussoorie. By 1894 there were 22 breweries in India producing 6 million gallons a year. Some high spirited people must have roamed around then 🙂 maybe some of them grew up to romance Susanna 😉 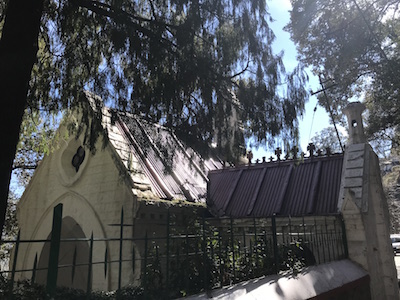 The second stopover was the Cemetery of Mussoorie where the first burial was of Sir C Farrington who died on 28th March, 1828. The plaque mentions that even Fredrick Wilson (known as Pahari Wilson) and his Indian wife Gulabo were buried here. 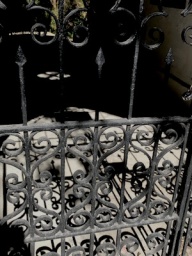 Two important historical personalities buried here are: John Lang, an Australian lawyer and businessman, who had represented Rani Laxmibai of Jhansi in a lawsuit and Major Hughes Fraser who fought in the British regiment against the same queen in 1858! Some Italian soldiers from the Second World War are also buried here!!! Dust to Dust, Ashes to Ashes!!! Death – a great equaliser for all. 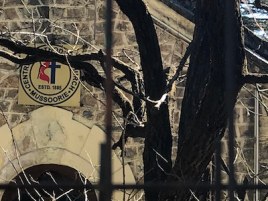 Another church in this city is the Central Methodist Church Kulri, established in 1885. According to the local historian, Mr Gopal Bhardwaj, the land for this church and the adjoining Hotel Brentwood was provided by Charles Grant. Mr Grant originally belonged to Inverness, Scotland. This church had 4 large clocks but suffered damage during an earthquake, 3 of these clocks have recently been restored and still remain.

On entering it, you will be bathed in multicoloured light streaming in through the coloured glass windows – wonder if they were originally stained glass? 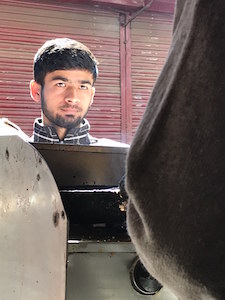 After eating a sumptuous meal of omelette and cheese – several combinations are available –  at Lovely Omelette Centre (which claims to be 100 years old) we strolled around and then drove up to Landour. Anubhav had presented the owner with a rapid sketch while he was cooking, the sketch was so good it brought tears to the owner’s eyes 🙂 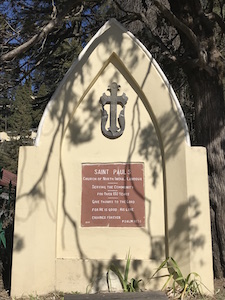 We soon reached one of the most beautiful churches of Landour – St. Paul’s, in the ‘Char Dukaan’ or ‘four shops’ area. Built in 1840 as an Anglican church, this is where Jim Corbett’s parents, Mary and Christopher had got married. It is a small building you see in its entirety only after climbing a few steep stairs. 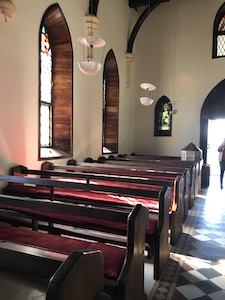 It underwent some structural damages but could not be restored due to paucity of funds. At this crucial time, some alumni from the Woodstock school donated to save the church in 2008 and it remains loved and at peace. 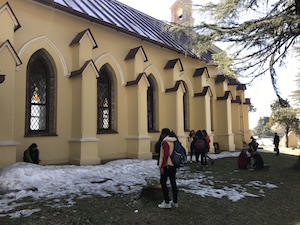 St. Paul’s Church, Landour, will remain etched in our memories as the place where the students found a lot of snow (they had been desperately searching some for me) and they could have a small snowball fight 🙂

The Char Dukan area is actually a narrow tiny street at the top of a steep road with the church on your right. There’s a tiny post office and four shops with some provisions and good food. To escape snowballs I found myself in Cafe Ivy – aided by the heavenly hot chocolate and waffle, along with the romantic music in this serene part of the world, I literally found myself 🙂 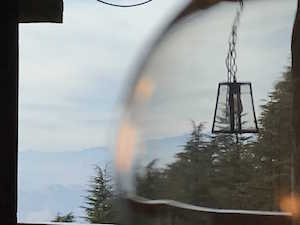 Listen to the night wind in the trees,

Listen to the summer grass singing;

Listen to the time that’s tripping by,

And the dawn dew falling.

Listen to the moon as it climbs the sky,

Listen to the pebbles humming;

Listen to the mist in the trembling leaves,

And the silence calling.